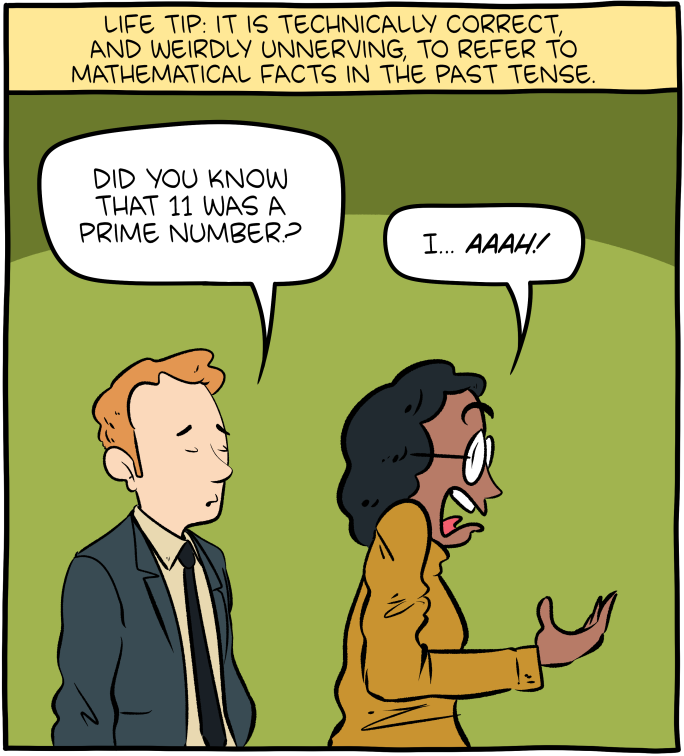 Hovertext:
Try this on some friend who claims to just loooove technically accurate statements.

wffurr
reply
It still is, but it used to be too.
Cambridge, MA

lowpass
It will have been. the expanse (of butts)

I kind of want to read that book now.
Cambridge, MA 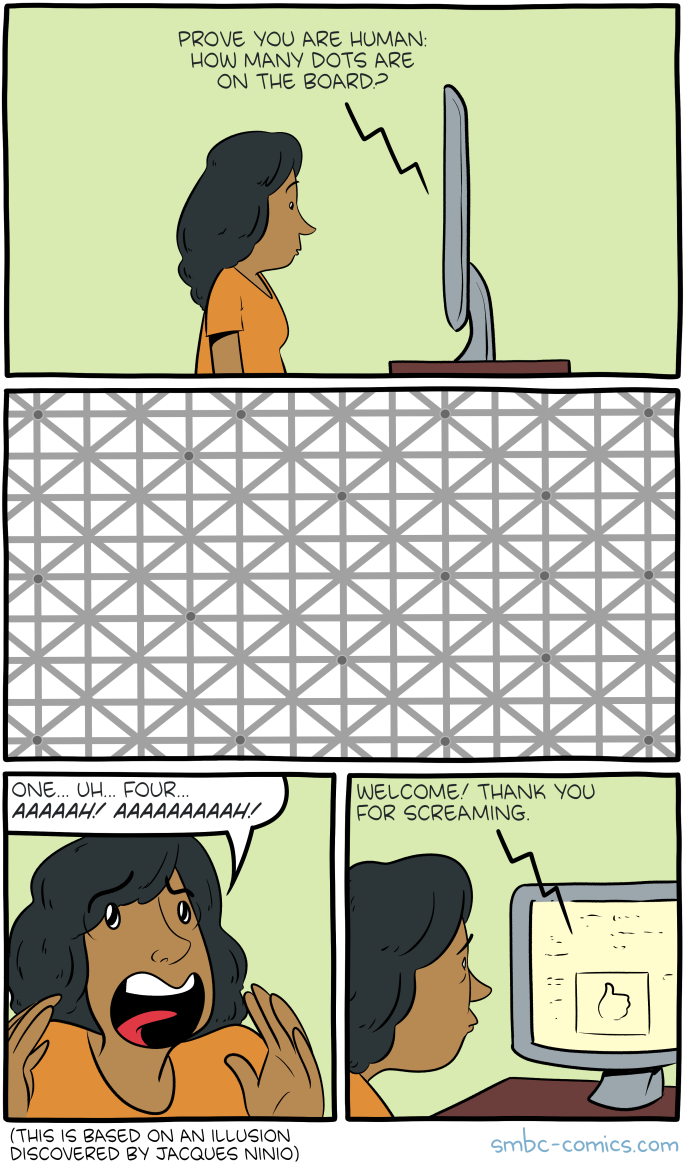 Hovertext:
If your reaction is 'but it's easy to count the dots' you might want to check your motherboard.

jlvanderzwan
Yeah. I find it helps to close one eye, and scan left-to-right 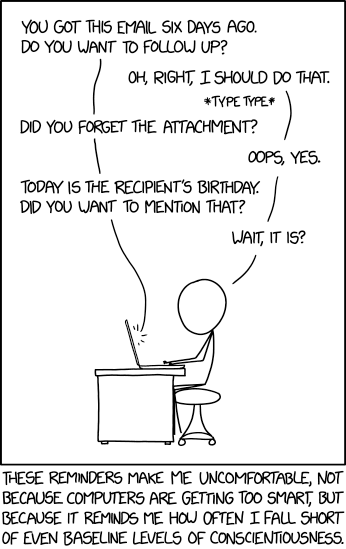 I feel personally attacked by this comic.
Cambridge, MA

This might be the most relatable xkcd ever.
East Helena, MT

alt_text_at_your_service
reply
The good news is that if the number of work and friend relationships you have exceeds your willingness to do the bare minimum to keep up with everyone's life events and stuff, one way or another that problem eventually solves itself.

alt_text_bot
reply
The good news is that if the number of work and friend relationships you have exceeds your willingness to do the bare minimum to keep up with everyone's life events and stuff, one way or another that problem eventually solves itself.

The difference between the real stuff and the fake shit is stark. STARK.

mooglemoogle
That fake shit isn't even clinically proven to be better than a placebo for congestion. It really is literally useless.

Programming in the 21st Century

I've seen a number of blog entries about technical interviews at high-end companies that make me glad I'm not looking for work as a programmer. The ability to implement oddball variants of heaps and trees on the spot. Puzzles with difficult constraints. Numeric problems that would take ten billion years to complete unless you can cleverly analyze and rephrase the math. My first reaction is wow, how do they manage to hire anyone?

My second reaction is that the vast majority of programming doesn't involve this kind of algorithmic wizardry.

When it comes to writing code, the number one most important skill is how to keep a tangle of features from collapsing under the weight of its own complexity. I've worked on large telecommunications systems, console games, blogging software, a bunch of personal tools, and very rarely is there some tricky data structure or algorithm that casts a looming shadow over everything else. But there's always lots of state to keep track of, rearranging of values, handling special cases, and carefully working out how all the pieces of a system interact. To a great extent the act of coding is one of organization. Refactoring. Simplifying. Figuring out how to remove extraneous manipulations here and there.

This is the reason there are so many accidental programmers. You don't see people casually become neurosurgeons in their spare time--the necessary training is specific and intense--but lots of people pick up enough coding skills to build things on their own. When I learned to program on an 8-bit home computer, I didn't even know what an algorithm was. I had no idea how to sort data, and fortunately for the little games I was designing I didn't need to. The code I wrote was all about timers and counters and state management. I was an organizer, not a genius.

I built a custom a tool a few years ago that combines images into rectangular textures. It's not a big program--maybe 1500 lines of Erlang and C. There's one little twenty line snippet that does the rectangle packing, and while it wasn't hard to write, I doubt I could have made it up in an interview. The rest of the code is for loading files, generating output, dealing with image properties (such as origins), and handling the data flow between different parts of the program. This is also the code I tweak whenever I need a new feature, better error handling, or improved usability.

That's representative of most software development.

(If you liked this, you might enjoy Hopefully More Controversial Programming Opinions.)
Read the whole story

wffurr
reply
Agreed, but how do you interview for organizational skills while also ensuring they know how to write a for loop or recursive function?
Cambridge, MA

wmorrell
We ask the following: in language and environment of your choice, write a four-function calculator; i.e. a program which will take two numeric operands, an operator (addition, subtraction, multiplication, division), and produce a correct answer. You may use whatever tools you like, have full internet access, and can ask us for help. If the candidate succeeds in writing this in about an hour, we ask hir to add in a primality test, showing some indicator if the answer is a prime number. I've found it's a good test to show how a candidate handles vague requirements, basic I/O, simple state management and/or parsing, refactoring in the face of changing requirements. It's simple enough to accomplish in an interview, and covers the basic skills needed to create a "real" program.

acdha
For non-junior positions I prefer to ask them to describe real problems they've worked on and how they addressed them. Trying to spring a full coding question is time-consuming and stressful but what I really want to hear is how well they understand the challenges and approaches – if they get things like loose coupling it's obvious in both what they dislike and how they propose dealing with it. These days Github is also invaluable for seeing code-as-practiced

reply
Please answer this really hard problem of the type you will never find in this job. Also, if you try any of your clever "algorithms" here you will be pulled aside and given a stern talking-to about readability and code maintenance. We don't want any cowboy coders here!
Denver, CO

rikishiama
reply
God I wish my boss -- who's been trying to find a suitable (to him) programmer for over 3 months -- would read this. Actually, I wish he could *understand* this, let alone read it.

QFT: "...the number one most important [programming] skill is how to keep a tangle of features from collapsing under the weight of its own complexity."
Pittsburgh, PA